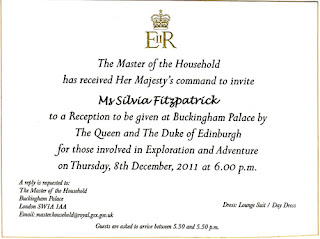 The last 12 months have been pretty hectic and this blog was the main casualty, but a couple of reallly great events have prompted us to start it up again.

In the Autumn Silvia was invited by the Queen to a reception at Buckingham Palace for those involved in Exploration and Adventure.

Silvia was unusually nervous before entering the gates, but the presense of another DMM sponsored climber - Nick Bullock - definitely helped make everything more real.

It was a quick blast down to London and a faster drive back after the reception, but not before Silvia was hit by the Congestion Charge cameras and received a £60 fine - a nasty tax for the unaware.

Sivia's mother in Buenos Aires was incredibly proud and the local paper ran a piece on her.
Posted by Silvia Fitzpatrick