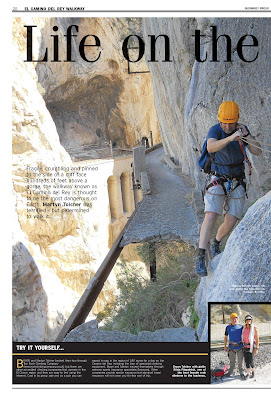 The Camino del Rey is fast becoming the focus for adventurous holidays in southern Spain.

The small Andalucian village of El Chorro lies next to a large lake at the foot of the narrow rocky gorge that contains the Guadalhorce river.

In 1901 the Spanish authorities decided that it would the perfect location for a hydro-electric facility and started work on the project; a key element of this was constructing a floating walkway along the sides of the Gaitanes Gorge (Desfiladero de los Gaitanes) that had been carved out by the Guadalhorce river. This walkway was to allow the plant workers easy access between the village and the pumping station at Gaitanejo Falls at the top of the gorge.

The gorge is over 100m high with vertical side walls and the brick, concrete and iron walkway was bolted onto it over a period of 4 years.

The walkway gained its name - El Camino del Rey/The King's Walkway - when the then King of Spain, Alfonso XIII, officially opened it in 1921.

Over the next 90 years a combination of time, the weather and the occassional man-made event (it was used for the final scenes of Von Ryan's Express - explosions and all) have left it in a poor state. The last 20 years it has deteriorated badly - I remember strolling easily along it to go climbing in the Gorge loaded down with a big sack and ropes - and large sections of it have fallen away into the river far below. 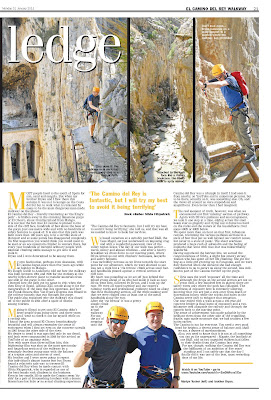 It became famous as the "Most Dangerous Walkway in the World" when there were a spate of accidents at the turn of the century and the local authorities made accessing the start very difficult for non-climbers. Then a couple of years later a UTube video of someone doing it without ropes, very fasy and whilst holding a video camera went viral and it's popularity as a classic adventure was ensured.

I am now regularly asked to guide the route either as a half day or full day adventure using ropes, harnesses and Via Ferrata lanyards to keep everyone safe. Martyn and Bryan Tolcher did the route with me in November of last year and were great; then out of the blue I received a copy of an article Martyn had written for the Guernsey Press and which had been published.

Fame at last!
Posted by Silvia Fitzpatrick No comments: