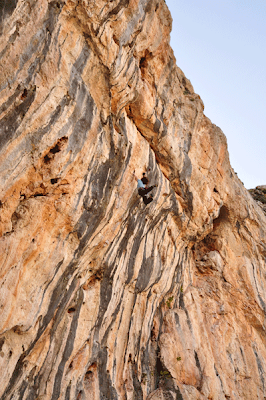 I managed to redpoint the classic 8a at Loja today.

Vibraciones Positiva is a long 35m stamina route that features long reaches on mainly good holds - a couple of the reachs are really long and caused me a few problems - my feet keep cutting loose. See left.

The whole crag is in perfect condition after so much dry weather and its position at 1000m and northerly direction have made it perfect during the recent hot weather.

I have finally taken a week off because Simon came across to visit and it was great to climb together. He has gone back now, but I still have 3 free days before my next clients arrive and so am off to Archidona for more steepness.

It was also good to see Alison B, who came on a course last year and returned to Villanueva del Rosario last week to explore the area some more.

Chris and Ryan arrive on Sunday for a joint climbing course and it looks like the weather is going to hold on being good for them - after that I am fully booked until the 19th December and January is filling up fast.
Posted by Silvia Fitzpatrick No comments: 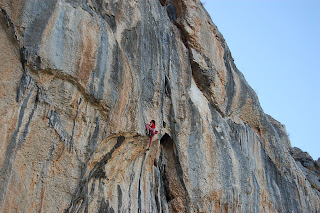 Very happy today because I managed my second 8b yesterday.

The route is called Golpe de Calor and is one of many fantastic routes in the Chilam Balam cave on the outskirts of Villanueva del Rosario.

The cave and surrounding area have proved very popular as the prolonged hot, dry season has forced climbers to look for shady, high crags. Chilam Balam cave faces north and lies at 1000m There were about 20 climbers at the crag yesterday - not bad for a crag where the routes start at 7c.

Golpe de Calor was equipped and first climbed by Bernabe Fernandez (Amazing roof climber and driving force behind a lot of hard routes in Andalucia) two years ago. Originally graded 8a+/8b it has settled at 8b - the grades are noticeably harder here than El Chorro. 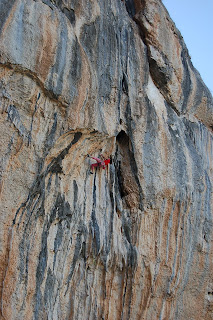 The route is 30 m long with the the first 15 meters on tufas and crimps on a wall that overhangs 20 degrees, then a desperate roof on undercut tufas and slopey footholds with a gripper clip. The top wall is super technical with minimal footholds and a final insecure runout to the chains.

I found it quite hard because I could not get the kneebar rest below the overhang - I wasted a day trying to get my foot and knee to stick before deciding that I was wasting more energy than saving.

On my first redpoint attempt of the day I got past the top crux but broke a small undercut - I really did not think I would have enough energy left for a second go, but somehow managed to fight to the belay.

This was the 5th ascent after Bernabes, Javier Morales, Carlito from Malaga and Urban.

All in all a great route! Thanks to Carlito, Gonzalo and Urban for all the help and encouragement.

The cave has seen a lot of development recently and the climbing topo for the area is fast becoming out of date.

It has been a good season so far - I was worried that after 7 months of instructing clients on a variety of climbing courses with hardly a day off that I might not be route fit, but the evening sessions on my home finger board have paid off and being on the hill has kept me aerobically fit.