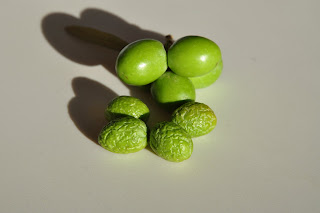 I'm have been over in Spain for a month now and the weather has been amazing for climbing. I have been completely full on with courses and the warm weather has made it especially enjoyable, but the local farmers have a different view - they are desperate for water.

The photo on the left shows the effect that the dry weather is having on the olives. The olives on top are how they should look at this time of year, but a lot are looking like those at the bottom of the picture - underdeveloped and wrinkled.

Olives are a mainstay of the local economy and this is potentially a big problem. The town ajuntamiento has imposed a water ban between 0100 and 0600 to try and save water, but they really need some rain.

The warm weather means that the high crags of Villanueva del Rosario have been really popular with climbers from Malaga and Granada - the shady crags of La Ventana and Chilam Balam have been receiving a lot of attention and the hard routes have been falling fast despite the fact that the routes are quite harshly graded compared to the routes at El Chorro.

The spanish climbing courses are proving really popular and there I only have 10 free days between now and Christmas.
Posted by Silvia Fitzpatrick No comments: 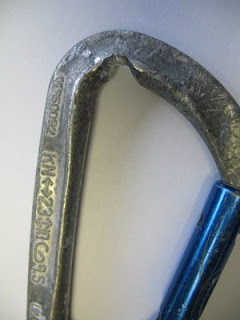 The carabiner to the left was sent into DMM for testing - I am not quite sure of its history, but the size of the groove that had been worn into the top bar is pretty impressive. DMM see bolt damage to carabiners fairly regularly, but this is exceptional.

The groove had eaten through 27% of the thickness of the bar and the volume of metal that had disappered was even greater.

I fully expected this carabiner to break under 10kN, but it actually acheived 26kN - greater than its rating when new.

It is difficult to explain this especially considering that a much smaller nick in a similar carabiner (see Mamba post below) caused a serious loss in strength. I don't want this post to encourage people to use carabiners in such a bad state, but rather use it as a pointer that there are a lot of variables involved in how and when kit breaks - some obvious and some that obviouslly are not. 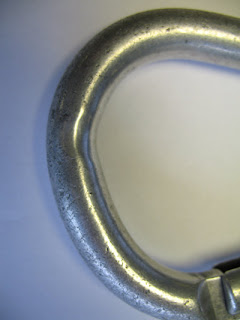 DMM customers have asked in the past "how much wear and tear before I should reire equipment" - hopefully the last two posts show that this is a difficult question to answer.

It should be stressed that this carabiner should have been retired a long time before it reached this state.

The second image shows a 30 year old HMS from the days when DMM was called Clog and employed about 10 people. It had a rope groove that had eaten away 6% of the thickness of the bar. It made 24KN.
Posted by Silvia Fitzpatrick No comments: 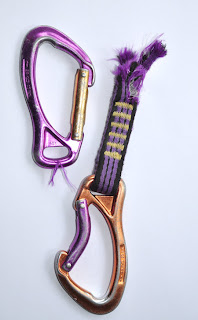 They are constantly subjected to short hard falls, clipped into sharp or badly aligned bolt hangers and ground against the rock. The tapes also get a hard life as they get grabbed with chalky hands and suffer harsh abrasion, especially as the run over the carabiners.

DMM recently received a couple of old Mamba quickdraws back that were over 10 years old and which the owner wanted tensile testing.

The quickdraws looked in reasonable condition - there was no bad visible fraying or fading on the quickdraw tape, although the ends had some mild fluffing where the tape had been caught between the rock and the carabiner. The carabiners functioned well and with a little lubrication would have been perfect. The metal was free from corrosion, although there were some sharp bolt marks on on of the straight gate carabiners.

The first Mamba we loaded up included the straight gate carabiner with 3 bolt scars on the inside apex. The tensile test started - at about 8kN it was obvious that something was going to pop early because you could hear the tape fibres starting to snap. This does not normally happen to around 18-20kN normally. The real surprise was when the straight gate carabiner suddenly blew out at just 13.6kN - almost half of its rated strength.

On examination it was obvious that the one of the bolt scars had created a stress multiplier that had then opened out the scar to create a full blown fracture.

The second Mamba blew out the tape at 15.5kN - about 60% of its strength when new. Once again it was obvious it was going to break early because the micro damage to the fibres could be heard starting around 10kN. 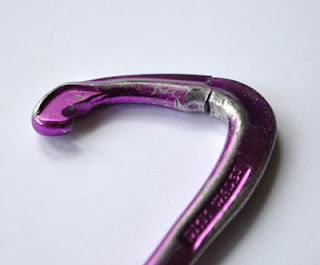 In a real world situation both of these Mambas would still have done their job - but they would be far less tolerant of stupidity or misuse i.e. connecting a short sling to the Mamba to hold you in position why you work a move and then slipping/jolting back onto it - this creates massive forces that can break new carabiners let alone half strength ones.

The slings blew early because they were old and some minor damage accelerated quickly to cause a complete failure. The carabiner blowing out early was surprising and probably worthy of further experiments because although the bolt scars were noticeable they did not seem excessive.