Each year DMM receive back a few carabiners where the surface of the carabiner has corroded and exfoliated. Almost invariably these carabiners have been to (although DMM have seen similar corrosion from carabiners used in ). They are often asked for the reasons why this corrosion occurs.

Aluminum alloys are widely used in the manufacture of climbing products because these alloys can offer a high strength-to-weight ratio combined with good ductility and toughness.

There are currently 8 families of aluminum alloys and each family group is identifiable by the first number of its name. The families differentiate themselves from each other by their principal alloying elements:

7000 series alloys have zinc as the primary alloying element together with magnesium. The further addition of copper to the aluminum-zinc-magnesium system together with small, but very important amounts of chromium and manganese gives high strength aluminum alloys that, although initially developed in 1943, are still the benchmark for use in climbing carabiners. There are stronger/tougher alloys on the market, but cost and productivity issues often work against them in a commercial environment.

Aluminium metal is a very active metal that oxidises very quickly. While this would be a weakness for most metals, this quality is actually the key to its ability to resist corrosion. When oxygen is present in the atmosphere or in the environment (in the air, soil, or water), aluminium reacts very quickly to form aluminium oxide. This aluminium oxide layer is chemically bound to the surface and it seals the core aluminium body from any further reaction.

This is different from oxidation (corrosion) in steel, where the metal oxide (rust) exfoliates, and constantly exposes new metal to corrosion. Aluminium’s natural oxide film is tenacious, hard, and instantly self-renewing. It is this combination of fast oxidation and a protective air-formed oxide film that enables most aluminum alloys to offer good resistance to most corrosive environments.

However the very alloying elements that make the 7000 series perfect for building carabiners make the metal more susceptible to corrosion. It particular it has been established that the addition of copper (2000 series alloys) and zinc/copper/magnesium (7000 series alloys) to the aluminum solid decreases the corrosion resistance of the alloy. This is due in part to the fact that the aluminum oxide film is now not consistent over the surface of the metal and contains oxides of copper, magnesium and zinc which can decrease its protective qualities.

In addition any metal ions passing into solution as a result of corrosion can then be deposited on the surface of the alloy and set up galvanic cells on the aluminum surface. This can dramatically increase the rate of corrosion.

However certain other factors often need to be in place to de-stabilise the oxide layer and accelerate the corrosion process, these include: 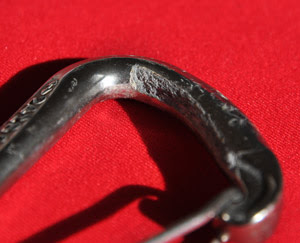 When the two dissimilar metals come into contact an electrical loop is closed, and the natural voltage differential between them causes electrons to flow. One metal becomes the anode (negative) and one will become the cathode (positive). This electrical circuit causes the anode to lose ions and the cathode to gain ions i.e. the more active metal dissolves. The copper is relatively inactive and the other metals in the 7075 alloy, including the aluminium base metal dissolve/change form. These adverse effects are magnified if the copper is out of solution at grain boundaries.

Anodising can reduce corrosion in aluminum alloys by increasing the thickness and hardness of the protective oxide layer. The standard anodising process used on carabiners uses chromic acid or sulphuric acid; the anodising process causes a chemical transformation of the aluminum material itself to create a thicker than normal aluminum oxide surface layer. This layer is often dyed and then it is sealed by a secondary chemical treatment, normally immersion in boiling water.

Anodising does help a lot in reducing corrosion, but it is not an alternative to looking after your kit – if the surface of the carabiner is nicked or scratched, such as happens when a carabiner is loaded on a steel bolt hanger, then this will allow corrosion to potentially begin.

In this situation there is a galvanic cell between the steel hanger (even if it is stainless) and the carabiner. The situation is worsened by the large cathodic surface of the hanger concentrating the current flow through the small anodic area of the scratched anodize on the carabiner.

Keep you carabiners dry, cool, away from salts and away from acids. If you do climb by the sea wash your gear in clean, cool water and dry it in a warm environment naturally and lubricate when dry if necessary.

Click on the tab below the main , central text. 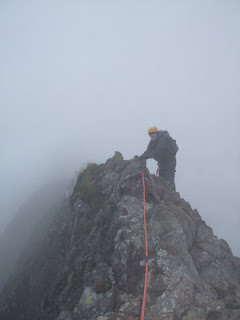 I recently was able to help a client fulfill a long standing desire to climb Snowdon via the Crib Goch ridge.

The weather forecast was fairly horrible with both high winds and rain predicted; the warm-up day was spent at Clogwyn Cyrau near Betws Y Coed rather than Tryfan because of the high winds in the Ogwen Valley. However at least we stayed reasonably dry there and covered all of the rope techniques that we would need on Crib Goch itself.

The following day was looking fairly grim as well, but at least this meant there were parking places in the Pen Y Pass car park.

It was fairly windy on the approach to the ridge itself with lots of low lying clag, but the wind died completely as we hit the ridge itself - perfect timing! The traverse along the famous ridge went very smoothly despite the rock being quite wet and slippery. The Pinnacles at the end of the ridge were climbed successfully before the wind hit us again on the strenuous hike up to the summit.

It was a long day out on the hill and getting late so we opted for the luxury of taking the train back down to Llanberis, where Simon met us for a quick trip back up the Llanberis Pass to the Pen Y Pass.

A perfect example of perseverance and hard work being well rewarded. It would have been all to easy to use the weather as an excuse to not try the ridge, but by taking it one step at a time we stayed safe, in control and were in the right place to make the most of the opportunity when the wind eased. A good day out.
Posted by Silvia Fitzpatrick No comments: 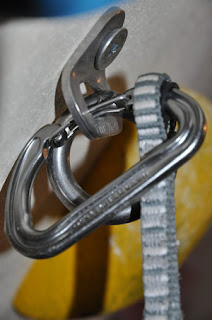 There was a photo of a broken carabiner posted on UKC today via a link to York Climbers. The photo has now been taken down for some reason, but it showed a DMM Phantom wire gate with a buckled gate and the gate misplaced on the outside of the nose.

There was some debate on how this happened and speculation that trust in wire gates may be lowered. Simon at DMM had a quick look at how this may have happened.

"I have not seen a biner look like this outside of a test lab and so spent a bit of time looking at different scenarios for this happening. The gate had obviously been cross loaded in an uneven manner against a hard object and we looked at how this could happen. We tried to replicate the situation using different bolts in different orientations at different angles .

I have tried to replicate this in the image above (a/apologies for the ring in the background, I did not have any plain bolts of this type on hand. b/The quickdraw is on the wrong way round- it just was easier to set up the shot with the tadpole holding the draw in place). The critical factor is that the orientation and shape of the bolt of the bolt facilitates the the biner hanging up and being trapped as the load is applied i.e. it happens much more easily in sheet steel bolts with small apartures that have twisted and sit 90 degrees out of position.

It is also possible to achieve this by getting another carabiner nose engaged in between the wires of the gate and a twisting moment then being applied to one of them whilst the other is held firm.

I hope that makes sense"

Personally I use Phantoms as my trad draws (weight), but use Shadows for sports (burly, keylock and fast to clip) - but then I'm lucky enough to have two sets of draws.


There is more information on climbing carabiners on my site in the tabs below the main text.

Plus there is more info on gear at the new Climbing in Spain site.
Posted by Silvia Fitzpatrick No comments: