Snapgates is a generic term for the non-locking carabiners that form the core of a climbers rack – there are loads of names for them - wire gates, non-lockers, plain gates, bent gates etc. 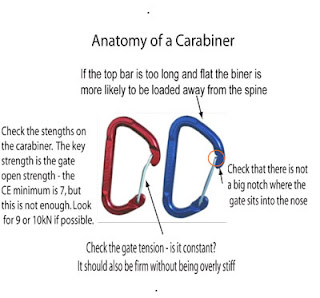 "Snapgates" covers all non-locking carabiners with either wire or solid gates and these gates can be either straight or bent.

The most often asked question is wire gate or solid gate….after initial skepticism there is a general trend towards using wire gates; this is based on some solid reasoning together with some misconceptions. A wire gate biner potentially has some key advantages over an equivalent solid gate version, however the devil is in the detail.

The key advantage of a wire gates is that it should be lighter than an equivalent solid gates because the wire gate weighs less than a solid gate. This is a real advantage that has substantially reduced the weight of a climbers rack over the last few years.

Smaller advantages offered by wire gates include increased gate opening and (generally) less likelihood of the gates becoming iced up when winter climbing. The lighter weight of a wire gate also has the potential advantage of minimising gate flutter. Gate flutter sometimes occurs in a fall when the movement of the rope sets up harmonic vibrations in the carabiner, these can - in certain situations - cause the gate to vibrate open and closed. Carabiners are significantly weaker when the gate is in the open position and if a load (the falling climber) is applied to the biner whilst the gate is momentarily open then there is a much higher chance of the biner breaking.

However so much also depends on the design of the carabiner itself and the stiffness of the spring in the gate - I would far prefer to fall onto a well designed, ‘strong’ solid gate biner with a ‘positive’ spring tension than a poorly designed ‘weak’ wire gate with a low/inconsistent spring tension. 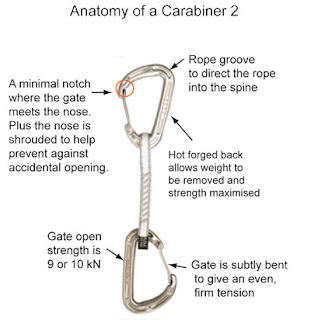 There is misconception that wire gates are stronger than solid gates. but in general this is not true. The only exception is in the minor axis test where the extra malleability of the steel wire gate can allow higher readings to be obtained. However this is the least important of the tests and minor axis loading should be virtually eliminated in well designed snapgates – the gate/nose interface is far more important and a far greater source of breakages.

The gate/nose interface – where the gate meets the body is the downfall of many wire gates because the design has been taken straight from its solid gate antecedents. This often means that there is a massive notch where the wire gate sits that is perfect for hanging up on wire/tapes/ropes and loading the biner away from the spine. This is made even worse if the carabiner has a long fat top bar a weak gate open strength and a weak spring. Simple stuff, but there are a lots of poorly designed biners out there - the current Clog wire gates are a good example of how not to build a carabiner.

Generally I would choose a good quality, strong, lightweight wire gate for traditional or winter climbing, but go for good quality, key lock solid gates if sports climbing.
Sports climbing is hard on biners because the steel bolts used to protect sports climbs can chew up the relatively soft aluminium used on carabiners very quickly. A chunky sports draw will last a lot longer than a minimalist wire gate, the key lock nose makes stripping routes much easier and the extra weight is offset by the fact that the draws are often left in-situ on sports routes for red-point attempts. A lot of people also feel that a well shaped bent gate carabiner is easier/faster to clip in extremis than a wire gate.

A lot of people say that carabiners should not be anodised, but there is a very strong case for anodising as long as the anodising is done in an environmentally safe manner. Most climbing carabiners are made from the 7000 series of aluminium alloys because these offer the holy grail of potential high strength and good ductility; however a downside of 7000 series alloys is that they are very susceptible to salt corrosion. Anodising really helps slow down the corrosion process and stop biners from seizing up.

Weight, shape and size are entirely personal and come down to looking/playing with the various options. The lighter modern biners are almost always smaller than their heavier counterparts and you need to choose where to draw the line on a carabiner being too small to use effectively.

There is more information on climbing equipment and how to use it on my main website.
Posted by Silvia Fitzpatrick No comments: 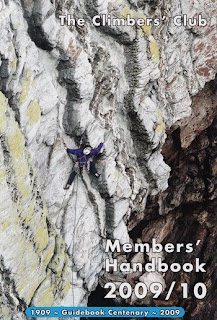 I did a day at Gogarth with the Hard Rock Challenge Team when they were touring the country ticking all the classic routes in Ken Wilson's seminal book.

The route for the day was Mousetrap itself and we completed it in challenging conditions between heavy showers - awesome climbing on amazing rock.

The Hard Rock Team were being photographed by a couple of professionals and I was surprised to find myself on both the front cover of the Climbers Club journal and the August edidition of climb.

Hopefully both will drive people onto Gogarth and stimulate them to explore the wonderful sea cliff climbing on this wonderful crag.
Posted by Silvia Fitzpatrick No comments:

A Busy Year for Climbing and Scrambling Courses 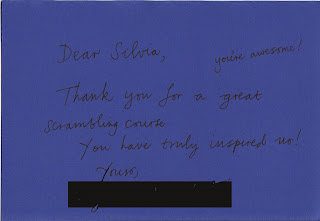 This year is turning out to be the busiest ever and it is great to see the outdoor industry in general bucking the recession.

I have been instructing pretty much constantly since early April and it has been really good fun. The amazing early season weather has gone away over the last couple of weeks, but hopefully the sun will come back soon.

It has also been really nice to receive a lot of really nice 'thank you' notes including a card from a great couple whom I worked with on a scrambling course in Snowdonia.

I'm really lucky to have such a great job.
Posted by Silvia Fitzpatrick No comments: 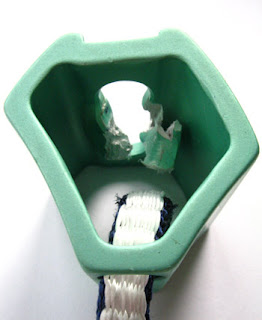 The photo on the left shows a DMM Torque nut that has been tested to destruction.

DMM have been busy fine tuning the Torque nuts over the last month and are now getting all the sizes breaking at over 17.5kN in any orientation on any size.

This is partly due to fine tuning the heat treatment, but largely due to perfecting the sewing on the 8mm dyneema.

DMM are pretty excited by this new dyneema webbing as it has allowed them to show the first 8mm dyneema quickdraws that use constant width webbing. 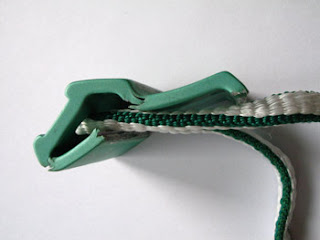 The dyneema uses a tubular costruction that is incredibly durable and resists fluffing really well.

The picture on the left shows another Torque nut that was pulled in another orientation and made 22kN before collapsing.

8mm dyneema vs aluminium - no contest..

There is more information on climbing on DMM Torque nuts and hexes on my website in the Climbing tips section under the main text about the climbing courses.
Posted by Silvia Fitzpatrick 1 comment: