The Strength of Old Climbing Equipment

I am often asked about climbing equipment - what equipment people should buy, should people buy second hand equipment, does minor damage affect equipment etc. This article is taken from my website Rock Climbing Company

The quickdraw consisted of 2 DMM Lynx carabiners - one plain gate and one bent gate that the customer said were about 20 years old plus a Petzl quickdraw sling that was also difficult to age.

The plain gate carabiner (1) generally seemed to be in reasonable condition with the key exception of the latch end of the gate. The end of the gate had suffered from salt corrosion at some point in its life and now was visibly corroded and the metal was exfoliating slightly,

The second image shows this in more detail - on the Rock Climbing Company page you can roll the mouse over the image for even more detail. This was considered serious damage as this part of the gate holds the rivet that locates into the latch in the nose and is structurally very important.

The bent gate carabiner was in quite good condition with very little visible damage and no visible corrosion.

The sling was slightly faded and had some abrasion damage at the end that held the plain gate carabiner. The fibres around the abrasion were quite fluffy, but there was no obvious cutting of the fibres. Again this is a bad place to have damage because quickdraws virtually always break at the apex where the load is applied

The first item to break was the sling (2) - this broke at the low figure of 9.23kN. It broke as expected at the apex with the abrasion damage - the 'slight fluffing' has cause a strength decrease of almost 60%.

We then pulled the individual carabiners.

The plain gate with corrosion damage (1) broke as expected at the gate as the rivet pulled free from the corroded gate. This carabiner broke at 12.55kN - when new it was rated 24kN, thus it had been substantially weakened, but was still suprisingly strong considering the extent of the corrosion.

The last carabiner was reassuringly strong and made a massive 27.90kN - cruising past its rating of 24kN more than 20 years after it was first made.

The morale is "visible damage relates to actual weakness - especially with fabric items".
Posted by Silvia Fitzpatrick No comments:

Learning to lead climbs and learning to place protection often go together. This section will hopefully offer a few pointers on placing protection correctly, safely and innovatively. Protecting climbs is an art form that is learnt with time, but having a rack of carefully chosen gear and thinking laterally can help you sew up pitches that others may find unreasonably bold. The following post is from an article on climbing protection from my website. 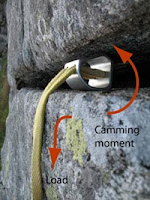 These are amazingly versatile pieces of kit in the right hands, however not all 'hexes' are the same. Hexes can either work as chocks or if designed correctly can also be used as passive camming devices.

In order for them to be used effectively as camming devices they need to be designed so that when placed in certain orientations and a load is applied to the sling then the chock tries to rotate around a surface rather than pull straight out.

The effectiveness of a hex as a passive cam depends on the units design. The original hexes from Camp make good chocks, but are too symmetrical to cam effectively. The Black Diamond hexes are equally poor at camming and, even worse, are slung on wire. Slinging hexes on wire adds one good advantage - the hex can be paced at full reach, but more than countering this is the fact that the versatility of the nut is vastly reduced - they can't be cammed effectively, they can't be pushed into pockets sideways and they can only be loaded in one direction.

Wild Country Rockcentrics on wire are equally restricted in their use, but Rockcentics on dyneema are good - they give a lot of versatile placements, cam better than the Camp Rockcentrics and are also lighter.

The old HB Quadratics are the real surprise and a testament to Hugh Banners design genius - their elongated shape means that they cam really well and lock into marginal placements. The overall shape is a bit angular and they are heavy and ugly, but the concept is spot-on. The overall winner in the battle of the hexes are the DMM Torque Nuts - I have been allowed to play with the prototype nuts over the last few months and they work very well.

The Torque nuts are essentially a combination of the best features of the Rockcentric and the Quadratic - light units that are really versatile, cam well and with each unit covering an extended range of placement options, They also have a double, skinny dyneema sling that saves on quickdraws and allows one side of the nut to be tied off short to improve camming ability. 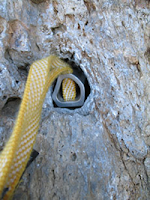 The image below shows a classic 'outside of the box placement for a hexcentric nut. There are no cracks in the rock face just some gas pocket holes that are too small to take a cam and not elongated enough to take a keyholed wire.

The trick is to just push a hex of the right size into the pocket with the tapes coming out of the top side.

If the nut is loaded it tries to twist around its bottom front edge and the top of the nut cams into the top of the pocket and locks solid - this type of bomber placement can be the difference between succeeding or failing on a route. Tricams can also work well in this type of pocket , but I find they are not as versatile as hexes overall. 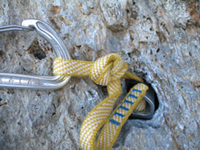 There is a sneaky trick that can make this placement even more secure - this is illustrated in the image with the sling tied off short, but works better if the sling is longer - the new DMM Torque nuts are perfect here because their doubled, long skinny 8mm dyneema sling allows them to be tied off easily.

The trick is to tie off the rear tape short - this creates even more of a camming action of the nut and makes it less likely to walk or be pulled out gradually by the movement of the rope.

This can also be avoided by using long quickdraws that don't transmit movement to the protection.

The image below shows an advanced placement that will perhaps show the potential of using hexes inventively - the flared crack would not take a normal nut - not even an HB Offset, but the Rockcentric loaded as seen in the image was bombproof because loading the sling just pulled the hex tighter into the placement. 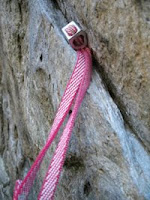 Once again using a long quickdraw is good practice and will stop the placement from being dislodged by rope movement.

It is worth stating that long quickdraws rule for trad climbing - less rope drag and less risk of gear being dislodged from its original placement position.

There is loads more useful information at rockclimbingcompany.co.uk
Posted by Silvia Fitzpatrick 1 comment: 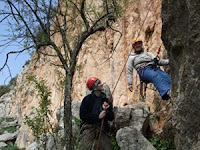 There has just been an interesting study of climbing accidents caused by poor belaying techniques carried out by a large swiss climbing wall.

Perhaps surprisingly their conclusion was that the vast majority of the accidents were caused by habitual, bad belaying technique and not so much by a lack of attention or distractions.

They also identified some of the sloppy habits that caused the majority of the accidents. There is a full(ish), translated report at Rock Climbing Company

A lot of the accidents were caused by belaying with an Italian Hitch, but I left this section out for the time being because not many UK climbers use this technique.

A lot of people may find it surprising that a fair proportion (6 out of 15) of the serious accidents ( leaders hitting the ground) invoved Grigris - although it should be pointed out that every case involved incorrect use of the device.
Posted by Silvia Fitzpatrick No comments: 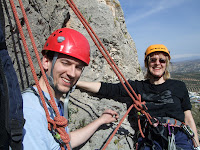 Just finished a really good course in Spain with Andrew and Andie, who were both great. They were on a Learn to Climb/ Learn to Lead course. We visted a lot of crags in the area and generally had good weather.
Posted by Silvia Fitzpatrick No comments: