Via Ferrata at Antequera 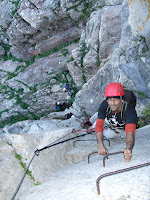 El Torcal near Antequerra in the Malaga province of southern Spain is well known to climbers for its strange limestne towers.

It is not so well known that the local climbers have established 2 great via ferratas on these towers.

I did the longer route a few days ago and it is great; long, absorbing and with an airy tyrolean traverse between two high towers. The circuits are fairly secret at the moment, but hopefully the access details will become more widely known soon.

Antequerra should become a new mega area for climbers - there is a massive Makinodromo style wall being developed close to the town - 20 routes at present from 7a - 8a with room for another 30. The wall is shady and will be great in the summer. 80m ropes needed as the pitches are stamina pump fests at 35 -40m long.
Posted by Silvia Fitzpatrick No comments: 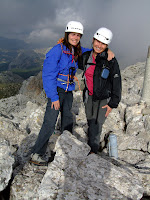 I had a really good course at the end of October with Gin who came across to Spain for a week to consolidate her leading and trad climbing skills. Lou Neil from Nant Peris was also across for a few days so we went out together and climbed on the crags behind Villanueva de Rosario - Los Pinos, Taco de Madera and the flanks of El Chamizo.

The weather was a bit unfair and we lost one day to rain , but all in all it was a really good week of climbing.
Posted by Silvia Fitzpatrick No comments: