Via Ferrata at El Torcal 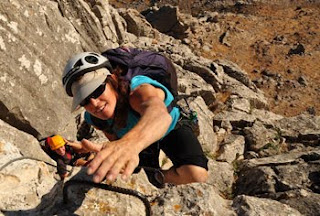 Plus we have received news that another 3 via ferrata routes are being built near Ronda just to the north of us.

The via ferrata at Villanueva del Trabuco does not look quite finished - all of the rungs are in, but the safety lines are not installed yet. The route is quite short, but steep and impressive taking a direct line to the summit of the highest rock summit on the Puente Roca.

Via Ferrate has become an increasingly popular choice for clients and last week I took Bastien and Emilie from Seville to Antequera and El Torcal to do the first half of the via ferrata route there.

The route at El Torcal is comprised of two parts; the first tackles a steep pillar that sits on the flank of Camorro de las Siete Mesas . This part of the route kicks off straight away with some vertical climbing to reach a platform. An exposed traverse with a couple of tricky steps then leads to the base of another steep wall and more vertical climbing. A further short physical section gains a steep slab and easier ground. A slightly exposed ridge traverse then leads to the famous tyrolean traverse across the gap that splits the pillar from the Camorro de las Siete Mesas. Pulling acroos this quickly leads to the far side and the last pitch on via ferrata rungs.

A short scramble then leads to a broad shoulder where it is possible to unrope. A lot of people finish here and traverse past the various goat herds back to the starting point. This section takes 3-4 hours depending on how confident the members of the party are in tackling exposed ground. 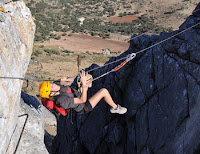 The second part of the route involves a steep 90 minute walk to gain a group of pillars that guard the summit of the Camorro of the the Torcal Alto - at 1336 m this is the highest point in El Torcal. 3 good pitches of via ferrata including a great traverse lead to the summit. The walk down is long. but overall it makes for a fantastic day out.

Overall the local authorities seem to be recognising that tourism is a key method of getting the Spanish economy back on its feet and are putting a lot of resources into establishing walking routes, via ferratas and new climbing areas. The Villanueva del Trabuco development includes both the via ferrata route, new rock climbing routes and a series of trekking routes that connect into the GR7.
Posted by Silvia Fitzpatrick